We’re home now (and have been for almost a week). It’s taken a few days to get adjusted, and we’re still feeling the effects of jet lag (I’ve heard it takes a day for every time zone you cross… so we’ve have two weeks to suffer!). MDF has probably had the worst of it, especially since she picked up a cold along the way and now just doesn’t feel well anyhow.
Anyway, enough complaining.
Our trip back seemed to go better than the one going. At least as far as rushing around in train stations and airports. This time we knew where we were going, and were more familiar with the process. We had less trouble with the trains too. Now that we realized that the escalators were easier to navigate with lots of luggage than the stairs were, we knew how to go.

MDF waiting for the train at the Iwakuni Station.

We (actually I) got mixed up abou the train we were supposed to catch in Hiroshima, so we rushed down to the tracks without needing to. The train we were going to ride actually would be arriving 15 minutes later than I thought. We were riding the Shinkansen (bullet train) again. On the way to Shin-Osaka station, a message flashed up on the destination marquee saying we were traveling at 300 kph. 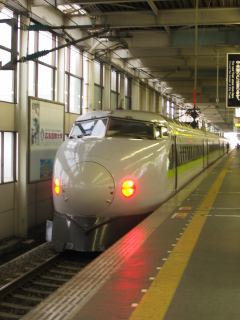 One thing I noticed on the final leg to the airport was that it is on an island by itself, and the only access is by the train bridge going out to it and one (I think) highway. The train bridge took a while to cross too.
We ate lunch in a McDonalds on the second floor of the airport. They only difference between there and the ones in the States is that the bergers seem a little smaller (drinks too), and the mayonaise tastes like it has soy sauce mixed in!