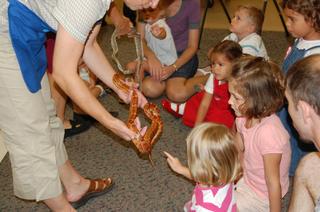 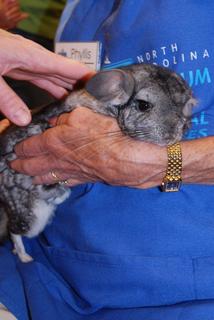 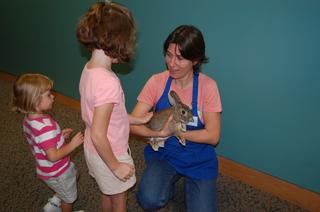 Sunday we slept late again. We got suckered into listening to a sales pitch from the condo management under the pretense of getting some information on the area. After the girls had lunch and a nap I took the girls to the indoor pool to swim. The water was nice and warm, but we all got cold getting out. That made CE grumpy. Later that afternoon we all went for a walk down to the golf course and saw a small herd of deer on the green. When we got back, and while CDF was cooking dinner, I was looking out the front window with the girls — we were looking for another feral dog that had been sleeping in the picnic shelter outside our building — and MD said, “What’s that?” I looked at the small animal running across the parking lot toward our car: a skunk! It ran under the Escape and down the hill.

The other day when I got home from work, I noticed a wild rabbit sitting beside the driveway eating (or out for silflay if you’ve ever read Richard Adams’ wonderful novel). It was content to stay there while I parked the car, went inside, and then came back out with the camera. Since we moved, almost three years ago, we’ve enjoyed seeing the wild rabbits that live around us. This year there haven’t been many about. In comparison, last year we had two or three regulars to the clover patch in our back yard.

So we were quite pleased to see this baby bunny in the front ditch as we went out for a bike ride. It sat very still while I went back to get the camera. It didn’t move until I got closer and it decided to make a run for the woods, making a wide circle around the bikes. 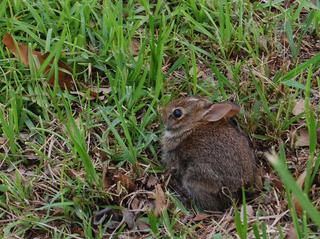 Bunny in the Grass

Interestingly we saw another adult rabbit on the bike ride a few blocks away from our street.

When we got home from church, I spotted a snake in the driveway. It was sunning itself near the double gate. I pulled up slowly and got out to see what it was. Our dog was so happy we were home, that she didn’t spot it until I started poking at it. Unfortunately that scared it under my car, where additional poking sent it scrambling into a wheel to hide.

At that point, CDF was “trapped” in the car, since she wasn’t about to walk to the house with even a small chance of crossing paths with a snake. So I ended up carrying her from the car to the porch! I’m sure we were a sight. 🙂

After I got them in the house, I checked on the snake again. It has come out of the wheel and was resting on the driveway. So I was able to shoe it out and direct it into the woods. As best I could tell it was a Redbelly Water Snake (more pictures), harmless, but not good pets.