CDF and I went to Glenn and Holly’s wedding this weekend. It started 11:00 AM and was held at the new First Free Will Baptist building on Gum Branch Road.

They had a lot of silver and white in the decor. The candle sticks (and there were a lot of candles) were all silver. CDF said that those were the colors — silver, white, and rose accents. The bridesmaids wore rose colored dresses (it might have been another shade of red…) that looked very nice and stood out really well against the silver and white.

We had great seats, two rows from the front on the Grooms side. It wasn’t intentional, but CDF made sure we got their early enough, and we were one of the first few people to be seated. I ended up sitting right beside the center isle, and I had a full view of the procession (and would have had a great shot if I was rude enough to take pictures during the ceremony).

The ceremony was short — CDF said 30 minutes — but it was traditional and touched all the important points. They had two songs, one before the father gave the bride, and one during the lighting of the candles. If I remember correctly we had at least one more song than that (and more talking by the minister).

The wedding cake they had was fairly elaborate and, as we found out later, was made up of four different flavor of cake (chocolate, vanilla/strawberry, carrot, and something else). Glenn also had a “Groom’s Cake” to the side that looked a lot like a chocolate snow man. I don’t think they cut into it though. 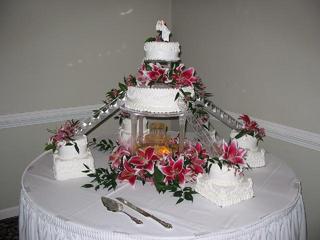 They had a meal served, turkey or beef on a roll, fruit, cheese, crackers, enough to make a good lunch. The most interesting was the “star fruit” which looked like a star-shaped apple, and tasted somewhere between an apple and sweet peas. 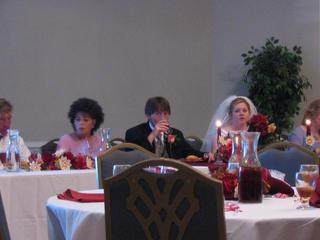 I really don’t know how they spotted me — unless it was Dom and CDF cutting up as I tried to take the picture.