Once we were in Detroit, we had to switch to another flight. After being delayed at lost and found (we forgot one of MDF’s books on the plane), we headed down the terminal to the next gate. We decided to walk since CDF was still woozy.

We stopped at some phones so CDF could make a call. MDF found a play picnic table and play-house. There was also a kids computer that she tried, but it wasn’t working. 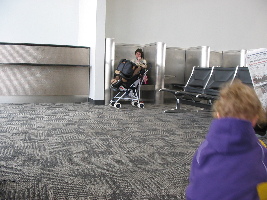 We passed our gate, thinking we had plenty of time to get something to eat. But on the way back realized they were doing the last boarding call. So we barely made it on to our flight. But we did make it, and ended sitting all the way at the back of the plane.