Going to Japan, we flew on a 747. It is the biggest plane in the Northwest Fleet, holding over 400 passengers. Our seats were in the rear-most section of the plane, and we could see the back of the wing out our window. 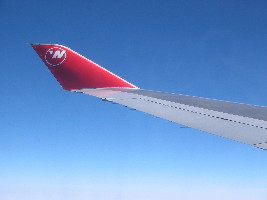 Twelve or so hours is a long flight. MDF slept some, but we spent a lot of time walking up and down the two isles. She made some friends on this flight. There were two ladies that knew each other, one in front of us and one behind, who were from Raleigh, NC, and were going to Taiwan. MDF took a fancy to the lady behind us, after smiling and waving for a while, she wanted the lady to pick her up and then went to sit with the lady for a long time. For a while she didn’t want to come back to us. Which was fine, we were happy to have a break. 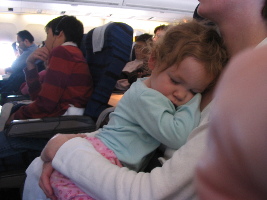 This flight was more bumpy than the last. We ran into turbulence a number of times. It may have been because of how far north we went. The plane’s path took us over Canada and Alaska, out over the North Pacific, and then back down across far eastern Russian and over North Japan. We mostly only saw clouds, but one time the cloud cover thinned out and all I could see below was something that looked like a frozen wasteland… possibly mountains, but I couldn’t tell for sure.

Our meals were served backward, we started out with chicken or beef for dinner at 3:00 PM (EST), then had ham sandwiches for lunch around midnight, and then breakfast was served at close to 2:00 in the morning (though by that time we were told local time for Japan was 4:00 PM).

As we crossed Japan, heading south, we passed Mount Fuji. I took some good pictures from the window. At first we thought the lower mountain ranges were what the Captain was talking about, but when we saw Fuji, we realized our mistake: it towered over the other mountains. 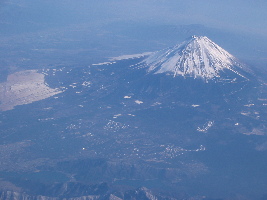 Our approach to Kensai airport took us over the bay. We circled a number of times, getting lower and lower, and closer to the water. One one the last turns I was almost sure that the wing tip was going to brush the waves, until I saw a cargo ship and realized we were still pretty high up.