We had no problem checking in. Once our luggage was checked, we said good-bye, and headed up to the second floor to find our gate. Of course, Gate A5 was all the way at the end. Still, we were early and could take our time getting there.

While we were waiting (and pointing out the planes and tractors for MDF) a man walked up and curled up in a ball near the wall, apparently having a lot of back pain. Eventually we overheard that he was having problems with kidney stones. He had been in the hospital twice, and had finally gotten well enough to play a round of golf the day before. But on the day they were leaving, his kidney stones came back with a vengeance.

The flight to Detroit was on an A319, one of the medium-sized jets in the Northwestern fleet. We boarded on the first call, and used all the extra time figuring out how to get MDF’s car seat secured. Finally we were settled and had time to get nervous about the flight. It was somewhat unsettling when, after we had taxied out to the runway, the captain said there had been a delay at Detroit and we would be waiting until 10:30 to take off.

Finally we took off. Of course, it was not as bad as we had been worried it would be, and actually CDF discovered she did best during the take off, it was the turning and ascending that started making her motion-sick. MDF on the other hand, after saying “whee” for a while, fell asleep. 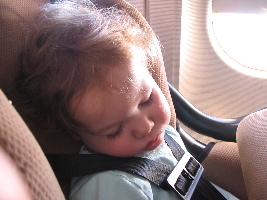 MDF asleep on the way to Detroit.

During the flight, we were served complementary granola bars and sodas. A group of three men across the isle from us ordered Bloody Marys to drink while they played cards. They even had time for a second round.

The landing was rougher than the take off, but one of the other passengers commented that it was one of the smoother landing she had experienced. Not that CDF’s stomach agreed.