Last Friday we went up to Morehead (actually Atlantic Beach) where my In-Laws had rented a condo for the weekend. I took the day off so we could spend time up there with them. The weather was going to be cool that weekend so we planned on just walking on the beach and visiting Beaufort.

In the morning MDF, Roy, and I walked on the beach for a little bit before breakfast. We looked at all most each of the wooden fish (and one crab) that lined the beach access catwalk. Then we went out on the sand and walked up the beach a little bit. MDF desperately wanted to get in the water, but it was too cold and we were not dressed for swimming (or even wading). Near the end of the walk we got a little too close to the waves and got our feet wet (at least I did), and Roy almost took a spill in the sand. 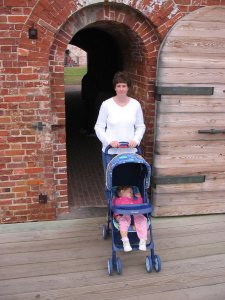 Later that morning we went to visit Fort Macon and walked around for a good while. I took a few pictures of us walking around. Near the end a park ranger was giving a talk about the muzzle loading guns that were used back in the 19th century. He had one that he was demonstrating with, showing how the bayonette attached, and how it was loaded. We stepped inside one of the exibits when he got ready to fire the gun. Even inside the gun gave a very loud report. It didn’t phase MDF like I expected, but I think the walls made enough of a difference so that it didn’t scare her.

For lunch we ate at a the 4 Corners Diner in the middle of Alantic Beach. We all ordered various sandwiches and got a hot dog for MDF. It was a nice little diner with a good atmosphere. It was decently busy while we were there and I imagine that it is packed during the summer.

After MDF had a nap we went over to Beaufort to walk on the water front. It has started to rain, but by the time we got there it was only an intermittent drizzle. We went in a number of small shops and CDF bought a dolphin clock to go into MDF’s room.

We visited the Maritime museum. It hadn’t changed since I was there last, and still didn’t have much to see. But MDF did like the duck decoy exibit, and I liked the poisonous snakes exibit. The museum also had some nice sailing ship models. We also went across the street and looked in the boat building warehouse. One could tour it, but it wasn’t accessable to strollers so we just stood outside the big front doors and looked inside at the boats in various stages of completion. 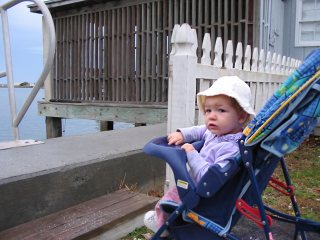 Beside the boat house we looked at the dock where there was a sinking canoe. MDF was also interested in the small boat that pulled up while we were watching.

Eventually everyone started getting tired (especially MDF) and we decided to go eat supper. We went back to Morehead and ate at the Sanitary Fish Market. In the dining hall behind where we sat there were large fish mounted on the wall (Tuna, Red Drum, Blue ?, Dolphin, etc.). MDF loved looking at them and since the hall was not being used we went up and down a bunch of times to see each fish. She wasn’t interested in getting too close to them, but she did like to go to the head of each table and point at the fish on the wall. 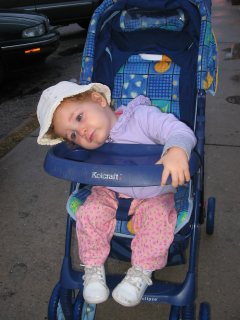 After supper we headed back home. It took us about an hour and forty-five minutes (and that includes driving slow in heavy rain) to get home. I think we made good time.