We had my family over for the Thanksgiving dinner. CDF had suggested it as an alternative to us driving up to Jacksonville to eat at my parents house. It turned out to be a good suggestion.

We had nineteen people total I think, but everyone ate well and had a good time. My parents brought the turkey, stuffing, etc. CDF baked a ham, made sweet-potato casserole, and cooked vegetables. MDF helped me make two pumpkin pies. Dom and Amber brought drinks and dessert. Heidi brought two more desserts. 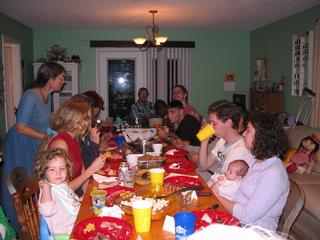 Sam brought his girlfriend Jackie, and they brought along Tony as well. Seth Davis came on an invitation from my parents (I think). But we had plenty of room, and plenty of food. 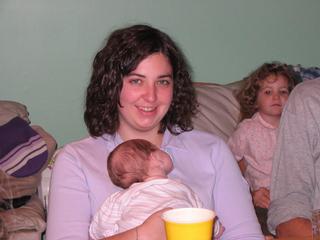 CDF and worked out a seating arrangement, and had made place cards with everybody’s names. It turned out well, and everyone seemed to like the idea, and nobody had problems finding someone to talk to. Amber spent a lot of time holding CEF as well — as did Seth. 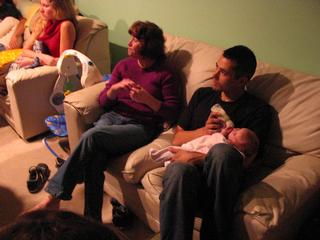 Another to Hold CEF

Nicholas’ birthday was on Thanksgiving this year, so my parents had brought some presents for him to open. We sang “Happy Birthday” to him, and after he had opened coloring books, dinosaur toys, a movie, etc., he started drawing dinosaurs in his new sketch pad. He did a great job too, especially on the “main subject” dinosaur.