This past Friday (June 3, 2005) CDF and I celebrated our fifth anniversary. Dom and Amber came over at 3:30 PM to baby sit MDF and gave us the evening to ourselves. CDF had gotten dressed up in her black fitted skirt and the beaded, sleeveless, red and black top. I wore khakis and a nice shirt. 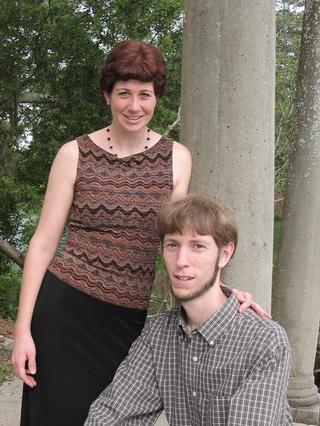 On the bench at the Pergala

To start out we went to Arlie Gardens. We took the camera and tripod to get pictures of us as a couple. We started out in the theme gardens and took a couple of pictures before walking along the lake toward the Pergala. The ground was still damp from rain earlier in the day, but we made it OK. Under the arbor we took a number of good pictures of us together and of CDF by herself. 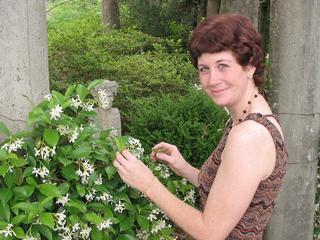 As we walked on some more, we had to pass a family of swans that were preening on the side of the bridge. We were okay until we were just passing them, then one of the parents hissed menacingly at us. We took the hint, and walked faster. Fortunately the swans “recognized” us on the way back and “knew” they had already warned us and didn’t feel they needed to say anything again. 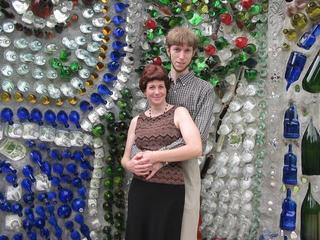 Before we left we went to see the “bottle chapel” that was constructed out of cement, glass bottles, and sea shells. It was neat. In the center was a tree made out of brass, and there were two benches built into the rear wall. We took some pictures of us sitting on the bench — well I was sitting on the bench and CDF was in my lap. I think a couple who was walking by got a kick out of that. 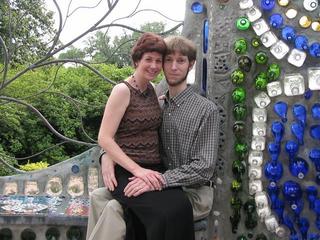 Having fun in the chapel

Then we left Arlie and went to Wrightville Beach to eat supper at the Oceananic, which was an upscale (to me anyway) restaurant right on the beach. We had a nice view from the second floor, looking over the pier and the out on the water. CDF wanted a table right beside the window, but we settled for a booth against the other wall. CDF ordered a steak and I ordered a shrimp and pasta dish (Fresca I think). For dessert we had chocolate chip pecan pie. The food was good (though my salad was more watery than I like it).

After supper we went out to walk on the beach, but it started raining. We thought we might take shelter under the pier until it stopped, but the wind made it too cold. So we decided to ride up and down Wrightsville Beach for a little bit and then head home for some romance.

We got home in time to put MDF to bed. She had a lot of fun with Amber and “Domey,” and was ready for sleep when we got there. We talked a while with Dom and Amber after she went to bed, but they left about 9:30 PM.