Dom’s wedding was this weekend, on Saturday, May 21st. After initial panic when Dom said, “I don’t know where I need to be going now,” things were straightened out and the ceremony moved on without a hitch (well… until the end when the recession music failed to play). 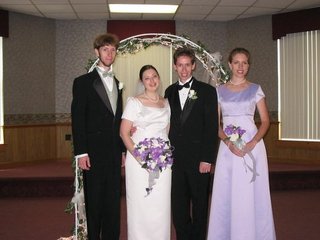 Pictures after the wedding

It’s probably worth mentioning that I made a speech for the toast that went well. 🙂