On the weekend I’ll often cook pancakes or waffles for breakfast — sort of as a Dad’s Special Breakfast kind of thing. Sometimes MDF wakes up early enough to help me. The picture below was actually taken back in August, and since it’s gotten colder she has been sleeping later, so I don’t see her until the pancakes are almost done and it’s time to eat. 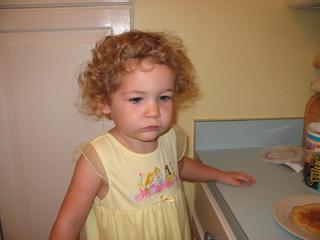