This was the second year we went to Airlie Gardens in Wilmington when it was decorated for Christmas. We went later this year, from 7 to 9 PM on Friday. It was sold out and rather crowded.

The tour starts in the new administration building where the Cape Fear Railroad Club sets up an O-scale layout of Lionel trains. After that the path heads around the Airlie Oak. 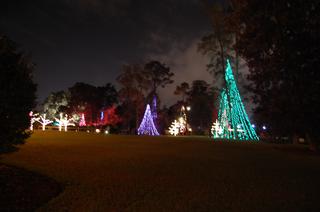 Some are the trees are illuminated with lights from below and others are draped with long chains of colored lights. This year they introduced “trees” made from bottles and lights.

The girls ran around in the lawn at the Airlie Oak to let out some of the energy before we went on. Then we walked over to the board walk that looks over the bay — across from Airlie Lake where the swans live. 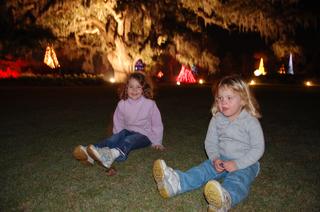 Resting at the Airlie Oak

Near the end of the tour, the path goes under a “tree” of lights. I thought it would be neat to get a picture while standing under it. 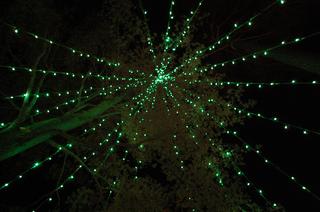 Looking up In a Light Display

After that the Railroad Club had a display of outdoor trains (garden trains?) set up along the path. The girls enjoyed watching the trains go by. On the passenger train, each car was almost two feet long.