Last week CDF and I went to D.C. so I could attend the Datatel Users Group conference at the Wardman Park Mariott hotel. The girls went to stay with their grandparents for the three nights that we were gone. We drove up Sunday, stopping to drop off the girls, and then drove back on Wednesday.

While we were up there we had time to visit the National mall. We rode the metro from the hotel to a central station, and then walked around for a few hours. One thing I thought was neat is that the station at Wardman Park is rather deep underground and requires two escalators, one which takes at least three minutes to ride, to reach. We took a couple of pictures of it from the bottom, but they still don’t capture the feeling of standing at either end and looking at the long stretch of moving steps. 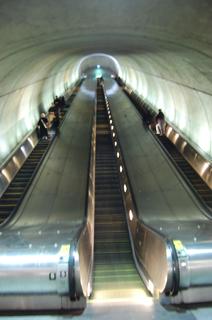 We did a lot more walking, and another day we rode the metro down to Dupont Circle to visit the shops there. In particular to visit Filene’s Basement and find out why so many of the other conference attendees went there. We also were a few blocks away from the National Zoo, but after so much walking we decided to drive there (regretting it after seeing how much it cost to park). 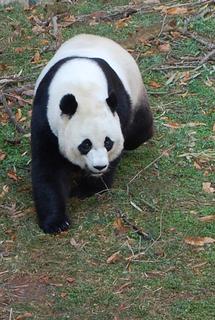 Panda at the National Zoo