Last week a tall ship (i.e. two masts with sails), the Prince William, from the UK docked in Wilmington on it’s way to Virginia to participate in the Tall Ships Challenge Atlantic Coast Series 2007 which goes from Norfolk to Newport, Rhode Island. I walked down to see it on Thursday and took a few pictures. 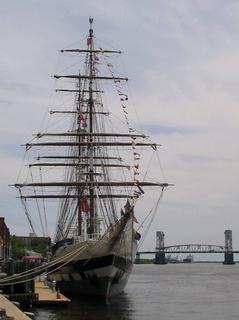 The Prince William Docked along
Water Street in Wimington

The Prince William is a training ship that recruits teens during the summer months to learn how to sail. Though one works, you actually have to pay to sail with them, somewhere from $500 to $1000.

Another ship had docked nearby as well, and looked impressive enough for me to want to take pictures of it as well. It was a research ship from the National Oceanic and Atmospheric Administration. I suppose it was getting ready to check out Atlantic hurricanes (the season having started the end of last week).