Last Saturday we went up to the park for a family day. It was the first time we had been to this park, but from the website, it looked like a good place to hike. To get there we went along I-40 to I-95 and then went west through Dunn, Erwin, and Lillington. The park was in the piedmont area and was on the Cape Fear river.

We decided to take the Raven Rock trail to the river, a 2.6 mile walk, because we thought it would be the most interesting. Along the way we saw a stream that MDF and CDF played in a little. There were a bunch of other hikers, many with dogs. One couple had a greyhound that they had “rescued” from retirement (often permanent). 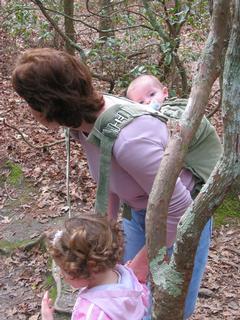 The path down to Raven Rock was steep and had lots of steps along the way. The final descent was down wooden stairs that had been built beside a small waterfall. I say waterfall, but it was more like a “water-drip.” 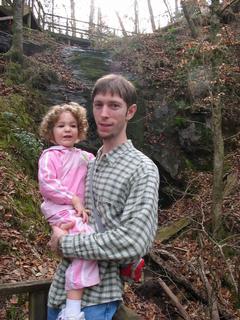 Halfway down, in front of the waterfall

The Raven Rock was a long stretch of rock where ravens used to nest. It had been carved out by the river a long time ago. We had fun looking around at the rocks and walking under the overhang. 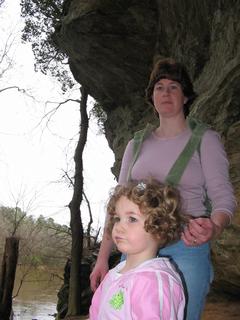 We walked along the riverbank for a little, but it was a dead-end, so we soon turned back and continued along the trail that would eventually loop back to the parking lot. MDF walked by herself almost halfway around the 2.6 mile hike, and I only had to carry her on the last stretch back. 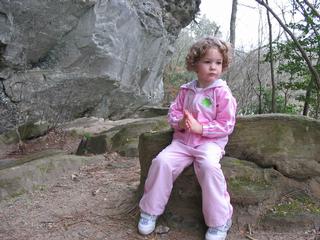 Looking out to the river