Today we tried to go to a place called “Three Falls.” The instructions said to go to the top of the mountain, turn right at a cabin, and we’d be there. So off we drove.
Now I ought to mention that most roads have a speed limit of 40 or 50 kph — which is only about 25-30 mph. It sounds slow, but most roads here would be narrow one-lane roads back in the States. 30 miles-per-hour is fast enough around here.
Anyway, so we headed up the mountain, and the road kept getting narrower and narrower, and it curved. And eventually it became a curvy, one-lane road with a mountain on on side, and a big drop on the other. Actually it was a two-way, one-lane road… more on that later. So we kept getting higher, but we never found a cabin and a right turn. Eventually we got as high as the road went and started down the other side of the mountain. 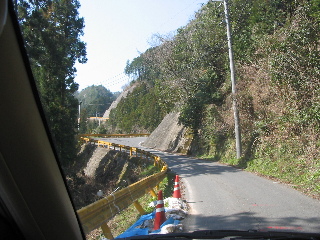 Going up the mountain.

At each curve in the road there was a mirror so one could see if anyone was coming from the other direction before going around the curve. We were alone on the narrow road until we started down the other side. Then we almost ran head on into a little Japanese truck. Fortunately our “lane” was on the inside, beside the mountain… so we moved over to let him pass… which he did. I’m sure at least one wheel was dangling over the side of the mountain as he went by.
After that excitement we decided we need to turn around. So we drove a little more until we found a section of road with a guard rail and that was a little wider than before. We made the turn, barely, and started back. We never did find the “Three Falls,” but didn’t mind settling for the “Three Rapids in a Stream” that we passed on the way back.