The area behind the Chicken Shack was very pretty. A path went around the various buildings and across another waterfall and stream. Across a rock bridge was a “Buddha in a Bib.” Apparently people weren’t deterred by the bib and put Yen there for good luck anyway. 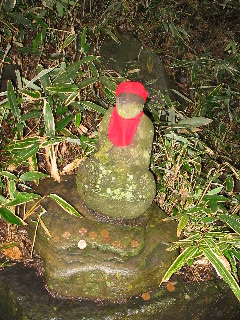 Buddha in a Bib

Hello! We went to a place yesterday that is in the mountains & is known as the Chicken Shack. There is a restaurant that you can eat at & shops that you can walk through. The shops sell anything from food to knick-knacks. The weather was nice–a little drizzly but was fine for what we did. 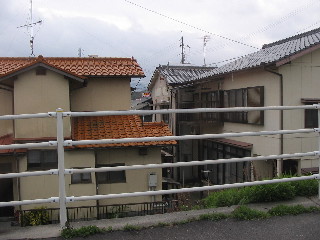 The first picture is of houses that we passed on the way. I am shocked at how close the homes are around here! And not only that they have 3 & 4 generations living in one house because owning a home is so expensive. Can you imagine?! Not only are the homes close to each other (some roofs over lap others!) they are right on the street as well! Literally, there is the road & then a house in some places. Others there is a small patch of curbing (if you can call it a curb) and there is the yard. They plant gardens down the way a bit & it is more of a community type garden. Everyone pitches in together & reaps together. Some have their own plots. 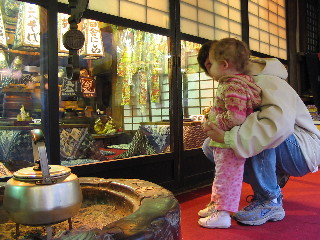 The next picture is of a typical Japanese restaurant–pillows for chairs & a small table. This is looking into the Chicken Shack restaurant–MDF & I were curious. All around the area they had wood burning & tea pots going. I don’t know if you could drink from the pots–but I do know the smell brought back memories of hog killing days my family used to do! I thought I would be too young to remember but I asked Stephanie & sure enough it does. Not only that I was also looking for the cracklin’ pot! J Yea good memories. 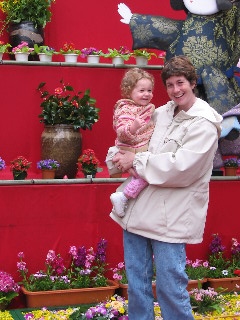 The next picture is of MDF & me in front of some very pretty flowers & Japanese figurines. The flowers by my knees are cut & floating in water. It was a very nice area. The following is of the 3 of us directly across from where MDF & I were just standing. Final picture–snack time for MDF. The Chicken Shack is the building behind me. 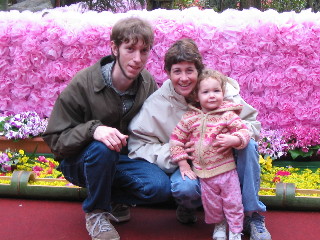 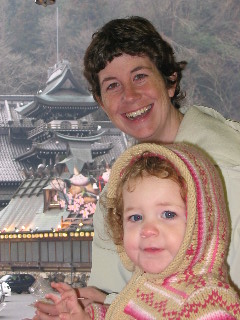 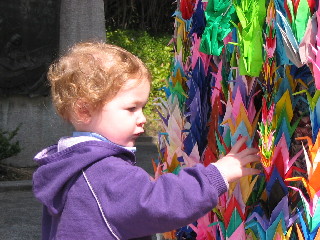 Lots of cranes hanging at a monument.

We went back to the Peace Park to go to the Hiroshima Museum. It covered the devastation that happened in the city when the atomic bomb was dropped and then recovery after the war. It also had some exibits about nuclear war in general. It was a sobering experience to see again what kind of damage atomic weapons do. MDF hurried us along through the museum, but we managed to see enough of the exibits and make a new record for time viewing the exibits (about 45 minutes I think).
On the way back to the park we were passed by a number of grade school marching bands that were parading in the street. Some of the Japanese children were dwarfed by their instruments, but they were all good musicians for their age.
After we sat in the park for a while, the decision was made to go back to shops once more, mainly to visit Deodeo, an “electronics and more” store. The store had about 10 floors, each having a different department (computers, lighting, audio, etc). On the ground floor they had lots of digital cameras on display. I stopped and looked at a number of different brands, Canon, Nikon. I even got to try out one I had been interested in, a Pentax *ist D.

We had a lot of fun yesterday at Hiroshima. We took the local train from Iwakuni. The train going there must have been old, because it swayed and rocked a lot — making at least three of us sick. Still we got there in one piece. We got off at a station on the outskirts of the city and walked down a block to catch the trolley to downtown. 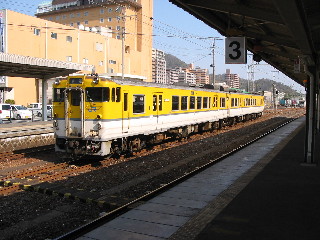 A local train at Iwakuni Station

We started out at the Peace Park and right away we saw the Atomic Dome — one of the few buildings that was left standing after the Atomic bomb exploded over the city. It may have been cleaned up some, but it has been left a ruin like it was at the end of World War Two. 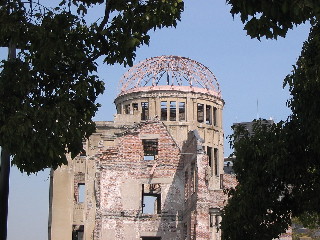 We walked further into the park and looked at the various monuments that have been erected to promote peace. Eventually we decided it was time for lunch and we headed toward one of the covered streets where all the stores and restaurants were.
We ate at Italian restaurant called The Garlic House. CDF and I had spaghetti; mine had mushrooms hers had a side of garlic-flavored egg plant. We ordered sweet garlic bread too, it came topped with butter and roasted garlic cloves. MDF sampled off everyone’s plate. I think she liked the bread and some potatoes from Vasco the best. 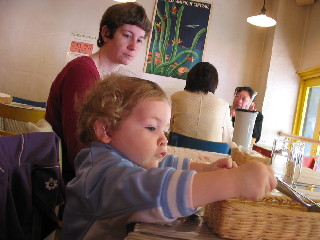 Eating at the Garlic House.

After lunch, on our way out I stopped at a Konica shop that was down a side street to look for a memory card for my camera. I found some but didn’t like the price so we moved on. The next store we stopped at was an Andersen’s bakery. It was a great looking bakery. In addition to bread, they sold cheese, wine, flowers, and jam. CDF and I picked out some sweet breads, donuts, and muffins to sample. In all I think we spent around 1,000 Yen. We sampled one donut outside and saved the rest for when we got home.

We went took the local train into Hiroshima today. JF will have get the pictures to me so I will be able to share them with you. We really enjoyed the trip. MDF did good & Abigail slept the whole time. It was a full day of walking & more walking. We walked through the Peace Park & through the museum about the A-bomb, and did some window shopping in a covered mall (not like our malls though; more of an plaza type with dome ceilings & streets all around. Very interesting. We ate lunch at a place called “The Garlic House”…I ate Spaghetti with Tomato Sauce (it also had tons of garlic in it & eggplant cut up), JF had spaghetti & bologna–same as mine pretty much. Some type of soup & salad came with it…and I also had buttered garlic bread that was sweet & delicious!!! I will admit I’m trying new foods & doing the best I can with it..but I’m ready for some good American food–cheeseburgers, steaks, fries, junk food…but some good ole fried chicken would be nice too. Something I know & that I’m used to. But I keep trying foods.
Tomorrow, Easter Sunday, we are planning on going to chapel here on Base. Later in the day, they are having a brunch meal & Peter Cottontail is stopping in for a visit. We may try to go & see Peter Cottontail…today we were in a store & there was a Winnie the Pooh–knowing that MDF likes Pooh I thought she would like to see him. I was wrong. She was fine until Pooh touched her head & then that was the end. She cried if he waved at her…I wonder how she’ll do with Pooh later on.
While window shopping we went to an electronic store that has multiple floors. On one floor they have massage chairs. They are around $2000–but man they feel good. I sat in one that did my legs, back & shoulders. I was about to go to sleep. There were others that massaged your feet, arms, and legs, back & shoulders. They have various massage chairs. It would have been nice to have been able to get one of those shipped home–especially for when I get pregnant again. That would relieve JF of a lot of rubbing. J
I suppose I will go for now. It is getting time for MDF’s bed time (as well as mine) and I’ll try to send pictures & e-mail more tomorrow.

We went to the Fish Tank restaurant for supper last night. It had traditional Japanese seating: a low table on a raised platform with cushions to sit on. As an American (and a tall one at that), I found it rather cramped, and almost got claustrophobic one time when I had trouble shifting positions.
The food was good though. We ordered meat and other food grilled on spits, such as chicken, mushrooms wrapped in bacon, asparagus wrapped in bacon, fried battered shrimp, fried battered octopus, fried rice, and noodles. They brought the food on individual plates, and then everyone got what they wanted.

We went driving yesterday afternoon, around Iwakuni and down to the famous Kentai bridge. It’s one of only eight bridges like it in Japan. It was almost too cold to be out, so we spent most of the time in the van. We did get out and walk in the park by the river. The cherry trees are just about to bloom — only have started, but they’re supposed to be in full bloom next week. We’re also hoping for warmer weather so we can walk the in the park. 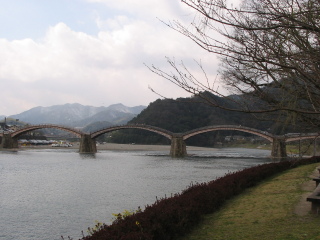 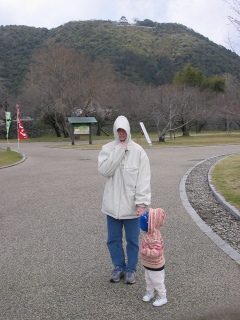 Too Cold to be Out

After walking by the bridge, we headed back. In the parking lot there were a number of Japanese cats hanging around the cars.

I didn’t get close enough to the cats to see if their eyes had the Asian slant too.
After walking around, we went driving through more of the river park. There were a lot of shrines, bridges and buildings. It will be very pretty when all the flowers start blooming. Hopefully we’ll catch the begining before we leave next Sunday. 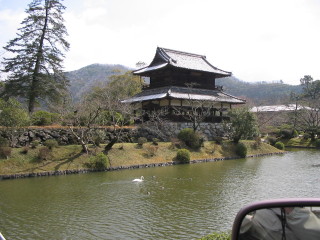 Building in the Park

MDF is quite taken with her baby cousin. She’s able to say Abigail’s name, and likes to watch Stephanie take care of her during the day. Yesterday CDF took some pictures of MDF and Abigail interacting. 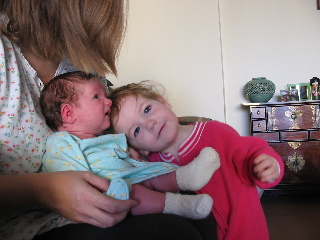 It has been in the 50’s for the past few days, but last night it started snowing! It didn’t stay long this morning, but it was pretty to look at on the mountains. 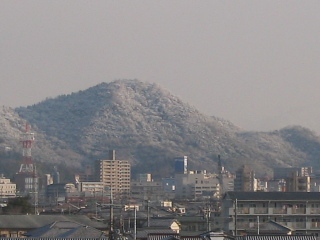