Last week CDF spotted a bike trailer for sale on a Wilmington web site. We have been looking for a trailer since CEF was born, but they tend to be expensive (around $100). But the one for sale was only $10! I told CDF to go ahead and let the lady know we were interested. Unfortunately she didn’t understand what I said, so it wasn’t until that evening that we talked again and she sent a message to the seller. It was still available though, and CDF went to pick it up the next day.

It didn’t take long to get it set up and attached. I tried to put it on my bike, but I have a quick release bolt on my wheels and they don’t work well with the bike trailer bracket. So it’s on CDFs bike.

As soon as we got it attached and set up she tried it going down the driveway and I suddenly realized that the tires were completely flat. So she managed to get it turned around and I grabbed the tire pump. Once the tires were inflated it was a lot easier to pull along behind her bike. 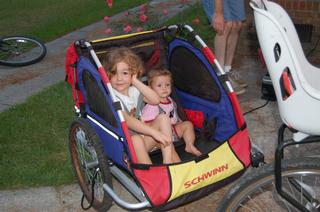 We’ve gone out for a ride two or three times so far. Both girls enjoy it a lot. And its really nice to be able to ride around Burgaw again. The other night we took some books back to the library — like we used to — and then rode down S. Wilmington street and followed the “loop” that goes down McNeil street and then back past the Sheriff Dept.