Thursday evening of last week we went for a walk like we often do around past the hospital and back up to Hayes street. As we got to the intersection of Bennett and Hayes we saw a little kitten coming toward us. He was mewing and toddling along. There were a bunch of flies on his back and I had a sinking feeling that he was in bad shape. Still he had pluck and tried following us up the next street. We took pity on him and I ran ahead to get a box to carry him in.

On closer inspection we could see that the flies had laid masses of eggs on his back. References on the Internet suggested that these flies are the first to spot rotting meat. I could only imagine what sort of sores were on this poor animals back. Still we took him home to see what we could do. While CDF talked to someone on the phone about getting him to an animal shelter I looked closer. His eyes were infected and couldn’t open (he must of been following us by the sound of our footsteps). and while his fur was matted with eggs, I couldn’t see any wounds or blood or anything that might suggest an injury. I put on rubber gloves and started to clean the eggs off.

It turned out that the cat was uninjured. Once we cleaned the eggs out of his fur he looked okay on the outside. We gave him water and a little to eat. 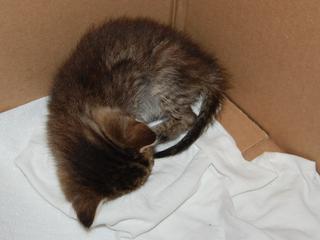 Asleep after a bath

The next morning CDF and the girls took him to the vet. He was very week, dehydrated, and had a viral infection that was common to kittens. They gave him fluids and we got medicine to give him. CDF took him home and gave him a bath to get rid of the fleas. The vet said if he could survive long enough to get back his strength he would be okay. We decided to name him Bennett for the street where we found him (or he found us).

Unfortunately the next morning he had gotten so weak he was having trouble holding his head up. He no longer wanted to eat or drink. By the time we got him to the vet it was apparent he was fading away. The vet took him back, but soon returned and said he had died.

We were all sad and Mo cried some. But we were still happy that we were able to help the little guy have a comfortable last few days.